Since 1994, the North American Vascular Biology Organization (NAVBO) has provided a forum for vascular biologists who are either in the traditional basic science disciplines (structural/molecular biology, cell biology, physiology) or studying the pathogenesis and treatment of human disease in disciplines such as medicine, pathology, surgery. NAVBO's membership is a mixture of scientists with different backgrounds and thus inherently different viewpoints on the same scientific problems. This makes for lively discussions and mutual education at our meetings and workshops. NAVBO provides the opportunity to communicate with a diverse cross-section of colleagues enhancing this discovery process, which will facilitate rapid translation into practical remedies.

Watch a short slideshow about NAVBO

The mission of NAVBO is to promote the study of vascular biology. The purpose of the society is to provide a forum whereby members disseminate and share knowledge related to the scientific field of vascular biology, to ensure the translation of knowledge from basic science to clinical practice. NAVBO supports and organizes meetings and workshops, and maintains this website linking the vascular biology community.

The name of the association shall be the NORTH AMERICAN VASCULAR BIOLOGY ORGANIZATION (hereby referred to as NAVBO). NAVBO is a non-profit scientific organization with voluntary membership.

The purpose of NAVBO shall be to promote, advance, and disseminate information and knowledge related to the scientific field of vascular biology and its interface with human medicine and pathology. These purposes shall be achieved primarily through the support of educational activities and scientific meetings.

Section 1. Eligibility. NAVBO shall consist of regular, trainee, corporate and honorary members. Membership in NAVBO shall be determined by criteria established by the Council, and in general, will be open to all scientists who share the stated purpose of NAVBO and who have demonstrated an interest in vascular biology. NAVBO does not discriminate on the basis of race, religion, gender, physical condition, or national origin. NAVBO membership is not restricted on the basis of geographic location.

All applications for membership must be submitted to the Council. A member is deemed to be in good standing if he/she is current with all dues and meets all standards, policies and procedures of the Organization. Any member with delinquent dues or who otherwise fails to meet NAVBO standards, policies, and procedures shall be duly notified in writing of such failure and may be dropped from membership if the failure is not corrected within a reasonable time period. Such decisions will be made by the Council. A member may resign at any time by written notification to the Council.

(a) Regular Members. A regular member shall hold an advanced degree (M.S., M.D., Ph.D. or equivalent) or shall have experience in the field (e.g. research associates).

(c) Corporate Members. An association, corporation or institution desiring to support NAVBO may be invited to become a corporate member. Levels and dues within this category will be determined by NAVBO Council.

(d) Honorary Members. Membership may be conferred by the Council or by a Committee acting under charge of the Council. Honorary members do not have voting privileges nor are they obligated to pay dues.

Section 3. Rights and Privileges. All members in good standing shall have the right to sponsor abstracts and attend NAVBO meetings. Regular members of NAVBO shall have voting privileges.

Section 4. Dues. Annual dues for membership will be determined by NAVBO Council.

The primary governing body of NAVBO shall be a Council, comprised of elected representatives from the membership. The Council shall establish the policies and procedures for NAVBO which will be specified in the by-laws. The President, Secretary/Treasurer and/or Executive Officer shall carry out the policies and procedures of the Organization, as directed by the Council.

Section 2. Duties. The duties of the Council are to carry out the by-laws of NAVBO. The Council shall meet no less than once a year at the direction of the President. The Council shall be a working group to promote NAVBO activities which may include: set the dates and location for NAVBO scientific meetings and invite other societies to join these meetings; establish liaisons and coordinate activities with other societies, such as the European Vascular Biology Society, the American Society of Investigative Pathology, the American Heart Association, and other organizations; consider for approval requests for membership and establish membership fees; review the annual operating budget and NAVBO finances; provide mechanisms for NAVBO elections; amend NAVBO by-laws as necessary; and consider other matters as deemed necessary by Council or NAVBO members.

(c) The position of Secretary-Treasurer shall be appointed by the President with concurrence of the majority of the Council. The Secretary-Treasurer will serve as an ad-hoc member of the Council and will have responsibility for the financial records of NAVBO, maintaining records of NAVBO's public activities, maintaining an archive of NAVBO and International Vascular Biology Meeting activities and providing assistance to the Council and committees in writing grants.

(d) Past-President. The Past-President shall serve as a voting member of Council in the capacity of Past- President for one year following expiration of the term of President in order to provide continuity to the organization.

(e) Councillors. Each Councillor shall be elected by the membership for a three-year term. Terms of different Councillors shall be staggered, so that one-third of the Council is elected each year. An initial term length will be established by the Councillors themselves after the first election.

ARTICLE VI - Affiliation with Other Societies

NAVBO recognizes its relationship to other professional organizations sharing interests in specific aspects of vascular biology. At the determination of the Council, such organizations may be invited to co- sponsor NAVBO activities. Council members may be selected to serve as liaisons to other Societies to foster collegial interactions with these groups.

Section 2. Other Committees. The Council may establish Committees as needed.

NAVBO will be the entity responsible for the organization of the International Vascular Biology Meetings when held in North America, and will participate as invitee, in the sponsoring and coordinating of this meeting in other international venues. NAVBO will coordinate and maintain a directory of vascular meetings. Notification of these vascular meetings shall be mailed to all NAVBO members. Announcements shall also be made in scientific journals, budget allowing. Sponsorship of scientific meetings shall be one of the major activities of NAVBO.

Earl P. Benditt Award in recognition to an individual who has made an outstanding discovery or developed a concept that has been seminal to our understanding of vascular biology or pathology.

Judah Folkman Award in Vascular Biology is a mid-career award, in recognition of the breadth of Dr. Folkman's interests and his many contributions to vascular biology, the award will not be limited to the field of angiogenesis per se, but will encompass the full range of original research in vascular biology. Awardee will have made a significant impact on the field through his/her original research accomplishments.

Stephen Schwartz Award for Outstanding Mentorship recognizes a mentor that has contributed significantly to the successful career of scientists who have trained in their lab; who has served as an exemplary mentor to graduate students and postdoctoral fellows and contributed to fostering an environment which facilitates both professional and personal growth.

Springer Junior Investigator Award recognizes a junior faculty member who has submitted outstanding work for presentation at a NAVBO meeting. The 2021 recipient will be chosen based on applications received with submitted abstracts. 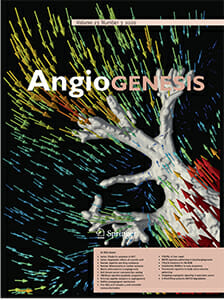 Angiogenesis* is available to NAVBO members for the discounted rate of $70!

Simply use the online renewal form here to add a subscription.

Angiogenesis is an international peer-reviewed journal devoted to the publication of top quality original articles and reviews on the cellular and molecular mechanisms that regulate angiogenesis in physiological and pathological conditions. As a central source for rapid communications representing the full spectrum of angiogenesis research, this multidisciplinary journal publishes innovative experimental studies using molecular, in vitro, animal model systems and clinical investigations of angiogenic diseases. Angiogenesis also reports on novel therapeutic approaches for promoting or inhibiting angiogenesis as well as new markers and techniques for disease diagnosis and prognosis.

See a sample Table of Contents

Find out more about Angiogenesis - visit the web site: http://link.springer.com/journal/10456

Find out more about Frontiers in Cardiovascular Medicine – Visit the website: http://journal.frontiersin.org/journal/cardiovascular-medicine

A Journal of Basic, Clinical and Applied Cardiovascular Science

*cost is higher for those outside the US