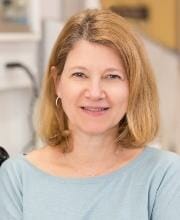 The D’Amore laboratory has a long history of interest in understanding vascular development and pathology, particularly as it relates to the retina in pathologies such as diabetic retinopathy and wet age-related macular degeneration.  Over the past two decades she has focused on the role of VEGF in these process and she and her colleagues contributed to the work that forms the basis for the use of anti-VEGF therapies in the eye.  More recently, her group has investigated the role of VEGF in the adult.

Current projects include examining role of endomucin-1, a sialic-rich glycoprotein that is highly endothelial-specific. In one project they are examining the possible role of endomucin in angiogenesis; a second line of research focuses on the role endomucin, a primary component of the endothelial glycocalyn, in regulating the interactions between ECs and inflammatory cells.

A hallmark of proliferative diabetic retinopathy is the formation of fibrovascular membranes over the retina during neovascularization, one of the clinical markers of PDR. These membranes are correlated with tractional retinal detachment and diminishing vision and are therefore removed to prevent further damage to the retina. A focus of the lab is the characterization of these membranes via histological and cell profiling methodologies.

In addition to pathologies of the retina that involve blood vessel growth dry age-related macular degeneration, which in its advanced form is called geographic atrophy, is one of the leading causes of blindness in people aged 60 and over. There is currently no therapy to treat this form of macular degeneration. We recently published that a novel cell death pathway mediated by NLPR3-inflammasome is activated in AMD. and we are currently investigating the mechanism of NLRP3-inflammasome activation in AMD to identify a potential therapeutic target.

In 2012, Pat became the Director of Research at Schepens Eye Research Institute. In 2014, she was appointed Director of the  Howe Laboratory and the Associate Chief of Basic and Translational Research, both at Massachusetts Eye & Ear.

Find more information on the web:http://www.schepens.harvard.edu/damore